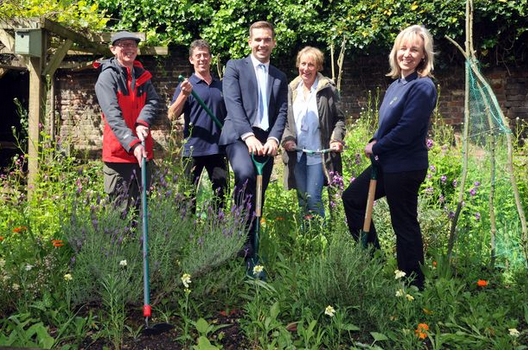 We were delighted to donate tools including a fork, spade and watering can to the Cranford Park Friends group after we heard how heartless thieves stole tools from a 'secret garden' used by cancer patients.

The garden, in the former kitchen courtyard of a historic country house, is jointly run by the friends group and Macmillan Cancer Support. Among the volunteers working there are people diagnosed with cancer and their families.

Bob Barton, secretary of the friends group, said: "We are very pleased with the response from Oakhill Estate Agents and others; it is a great boost to the morale of our volunteers and will help make the secret garden better than ever this summer. We will not be keeping the tools on site."

He added that it now had enough tools but donations were still needed to help the group prepare a bid for Lottery funding in conjunction with Hillingdon Council, which manages the park, in The Parkway, Cranford.

Michael and Justin Wright, of Oakhill Estate Agents, in South Street, Isleworth, said: "We wanted to help is because our granddad lived in Cranford and would always go for walks in Cranford Park before he passed away in 2001 from cancer.

"I think they do a great job at the secret garden of preserving the grounds. Cranford Park truly is a hidden gem and in my personal opinion one of the most beautiful parks in Greater London."

The secret garden is open to volunteers on the second Sunday of every month, from 10am to midday, with tools and refreshments provided.