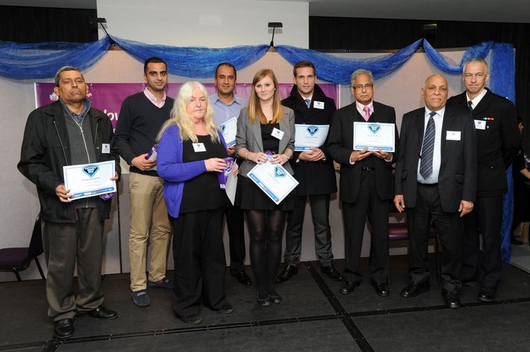 Hounslow Community Safety Heroes awards recognise unsung heroes who have helped improve safety in their communities and these were spotlighted at an awards ceremony on 12th February.

A number of people, from Neighbourhood Watch stalwarts to leaders of residents groups, were honoured at the Hounslow Community Safety Heroes awards ceremony organised by Hounslow Council and the police.

They were praised by police, fire and council chiefs for their efforts, which ranged from tackling antisocial behaviour in parks to arranging events in their neighbourhoods.

Old Isleworth estate agency owner Michael Wright of Oakhill Estate Agents was recognised for the voluntary work he does at Feltham Young Offenders Institution, The Priory detox clinic and within the local community in Isleworth. Michael is committed to helping young men suffering from alcohol and drug addiction or from underprivileged backgrounds, to turn their lives around.

After collecting his individual award Michael said: “It is a huge honour to be recognised alongside many others for the voluntary work I do in my spare time.

I sincerely believe that individuals can change and that, with the right input and support, we can help make a difference to improving the lives of everyone within our local communities.”

Oakhill Estate Agents are based in Old Isleworth and provide both sales and lettings services.

Michael and the team can be contacted at the Oakhill Estate Agents offices at 6 South Street, Old Isleworth, by phone on 020 8797 7977 or by email at info@oakhillagents.co.uk